Boating detox: A trip to Sark

Arriving by inflatable dinghy at the stone steps of a wild and remote bay on the island of Sark was the defining moment of the trip for me. The adventure had really begun now and Sark was, well, magical. 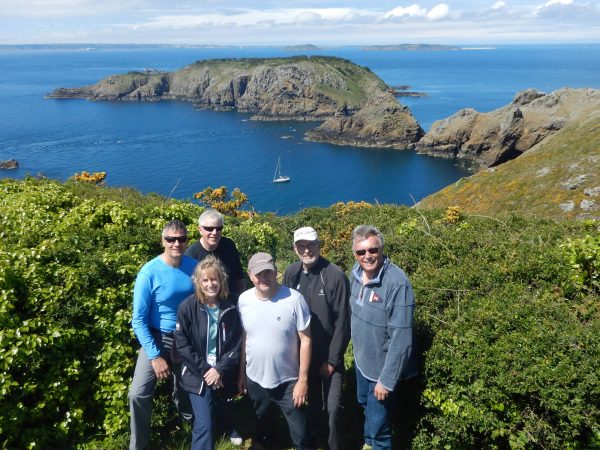 We had set off from Hamble on a beautiful evening with calm seas and light winds initially. An expectant excitement was noticeable amongst the crew before we hoisted the sails and settled into our rhythm as we headed off down past the Needles and into the Channel. Watches commenced, three hours off, three hours on with starlight to guide us on a cool but wonderful night heading 180 degrees due south, donkey off, sailing on a strong steady breeze and averaging an equally steady seven knots. Heaven. Head down, rocked to sleep from three until six and then it’s light by the time I emerge from my slumber.

The Cherbourg Peninsula is in sight and we’re focussed on three things: lighthouses and cardinals to guide us through the Alderney races, bacon sarnies and coffee. One at a time mind, had I mentioned we are an all-male crew? Six of us on board, with an excellent mix of old hands (I use the term advisedly so as not to offend) and budding yachtsmen like myself on only my second crossing. But the mix works well and soon, under Martins’s guidance, the spinnaker is out and we’re into the nautical rhythm of “grind” and “ease” as our bright pink sail accelerates us with the tide down towards Guernsey. 13 knots over the ground recorded at one point I think I heard someone shout. 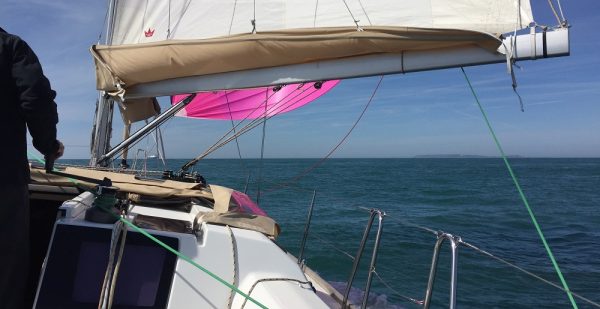 Passage-making into Guernsey was errr, exciting, but I won’t go into details, partly as I’d gone below for another forty winks. All I’ll say is that the crew of Diamond Days had a first-hand, close-up view of the many rocky islets that dot the coast of this small archipelago. Arriving in St. Peter Port, like so many arrivals by boat, was another very memorable moment. Sunshine, yachts, harbours, beer, wine and good company will always be a good mixture but the added zest of a journey completed and the compared tales of newly introduced compadres from our flotilla of three made it all the more enjoyable. As Pure Magic arrived the party was complete, or perhaps I should say. the party started?

Writing this now, with a coffee at my dining room table, I have to say, I am seriously yearning. To be there all over again, to have that feeling all over again. But I haven’t even got to the best part yet! So I’ll skip through our evening in Guernsey, hot showers, lots of restaurants, a glimpse of a huge six-metre tidal range (six metres!), a walk to a splendid Victorian tower overlooking the port, stories of Queen Vic herself, of liberation, the ‘sill’ and a bloodred sunrise I randomly popped my head up the companionway for early doors on Friday – so there you have it, consider yourself fast-forwarded through St. Peter Port.

But no, it wasn’t Guernsey; it was the island of Sark that stole the hearts of one and all. Even though it looked (and was) a shortish sail over to this tiny brooding island, there was definitely a time-warp thing going on here as we crept into a sheltered bay below dramatic, wild and rugged cliffs. We picked up the last mooring buoy and waited while our bretherens on Kaboodle and Pure Magic came alongside before relaxing for the afternoon. Smoked salmon, some fine wine and some Mediterranean-esque scenery helped us all relax just that little bit more as we forgot about emails, meetings, office and home life altogether and prepared to head ashore. 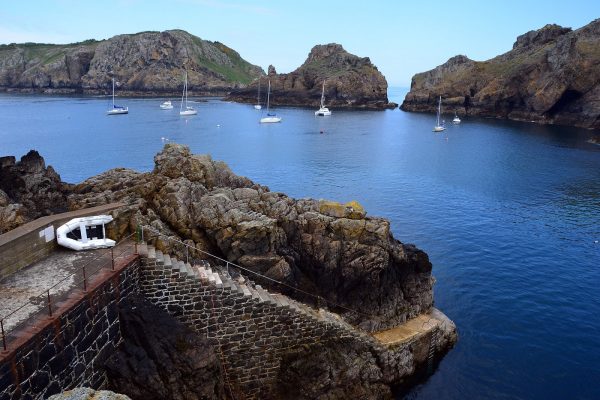 The chicken-and-the-fox-in-the-boat puzzle stood us in good stead for the numerous trips we made back and forth to land at those steep steps. I was first to land and last to leave this sheltered landing point and was gob-smacked by the rate of tidal fall as I sat waiting on this stairway to Sark heaven. We were on spring-tides minus one day and close to a six-meter tidal range; so the metal cleat I’d fastened our painter to when I’d landed, plus five more steps were completely covered by the time the next dinghy arrived, and the same with the next, and the next. Advice? Take a long line (a Genoa sheet) to tie on. I’d never seen anything quite like it.

Our walk across the island and the spectacular causeway to Little Sark gave us that first feel for an island that has no roads and no traffic and is many years behind the rest of the world. Elizabeth, our characterful host at La Sablonnerie restaurant gave us a very warm welcome – “Darlings, you simply must come and have some sloe gin with us after your meal” – says it all really, you had to be there… Lobster, crab and prawns consumed (just a bit of wine too) and we made our way back via a hotel bar through the dark (and the odd shower) for more chicken-and-fox boat play until we were all safe and sound in our various saloon cabins, some music, some passage planning and a bit more wine for some. I won’t mention Vince’s pole dancing (oops, oh well, there you go, it’s out now, sorry mate). 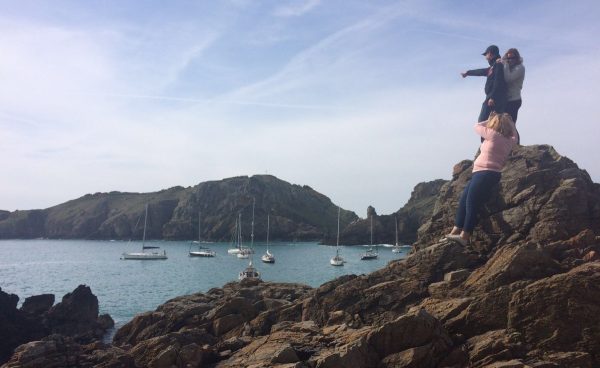 Loving Sark so much from our brief evening encounter, we decided to stay an extra day. How wonderful to be footloose and fancy free, our accommodation and anchorage free of charge and only a bit of weather and tide to think about.

So I’ll fast forward again because quite honestly, I’m still a bit lost for words, and you just won’t ‘get’ Sark until you’ve been. 400 inhabitants and a strong touch of self government, sandy tracks, a few Wild West style shops, abundant and verdant spring flowers everywhere you look (even wild orchids), a small port, a lighthouse, Buddhist carvings, fish and chips, my zig-zaggy attempts at outboard skills, a duo-cycling collision at a cross-track where there is absolutely no traffic…

A charming, simple island locked in a time warp. You can go to the ends of the earth looking for this kind of place (believe me I have), but Sark is right here. Well over there, and a bit tricky to get to unless you’re a sailor – be proud of that and put it very high on your list of places to see along with Petra, the Grand Canyon, Lalibela and Angkor Wat.

An evening departure brought us back, slowly slowly at first, over flat seas in light winds for the voyage home; then a black night under dark skies which threatened and flashed lightening but never quite dumped on us really I’m pleased to report. 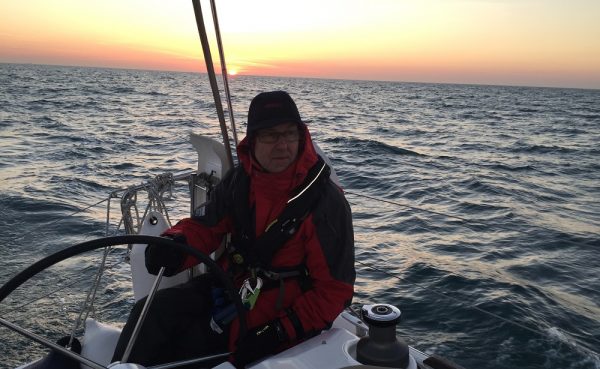 Arrival back in Blighty was exciting; we’d been pushed by the tides towards Christchurch Bay and a bit of a race was inevitably on against Pure Magic (we’re an all male crew remember). Strengthening winds and some clever trimming from our crew gave me a fantastic spell at the helm and we almost caught Magic (Kaboodle was long gone having anticipated the tides well after the Alderney races) but somehow (SOMEHOW) she managed to evade us when we were almost within bread roll range (once again, you have to have been there…).

By mid morning, the Magic Bus was getting out of our reach. Some clever thinking from Martin (plus a large slice of local knowledge) after we had passed the Needles and we headed left of centre in the Solent (i.e. North) and made straight for the South Coast (at new point we were almost in touching – ice-cream buying – distance from the busy beaches of the first real glorious Sunday of summer).

Close hauled and watching depth and mobile apps hawkishly we tacked back and forth; me, having a ball at the helm, Martin counting us down each time we went about, and the well-hewn skills of a crew working together as a unit; it was a fantastic hour or so and as we pushed up towards the cardinal at Lepe Spit, we saw the bows of Pure Magic. Bows and not stern. Not that it mattered at all, honest.

280 miles logged, a PB for Mandy Boston (her first cross channel skippering) and a host of memories to bring us back to the water again and again.

So where next? West Coast of Ireland anyone?