The most important reason we sail – A trip to Mupe Bay 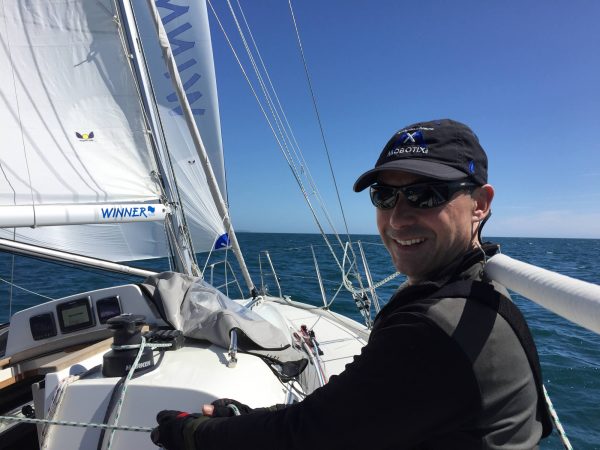 It’s fair to say that Vince Salva has caught the boating bug.

Whenever he can, he escapes the city to Hamble on the South coast and heads out to sea. He takes a kit bag and enough supplies to last the weekend – it’s his happy place.

Vince sailed a bit as a kid but it’s something he’s only returned to more recently, and he sees it as a way to detox from the stresses of his busy schedule, returning to work fresh and rejuvenated.

For several years now, doctors have been prescribing outdoor activities as a way of combating health issues such as stress, anxiety and depression. Some people go hiking in the mountains, but for Vince being happy is being at sea.

Having met Vince through a mutual friend, I discussed the idea of joining him and his crew on one of their trips away. I wanted to test the idea of using nature and specifically the sea, to boost wellbeing by escaping afloat at the end of the working week. The benefits sounded encouraging.

The plan was to arrive in Hamble on Friday evening and head West for Dorset’s Jurassic coastline. Even on the popular South Coast, there are still plenty of places you can only reach by boat. Beaches and bays with no ice cream kiosks, car parks, screaming kids or crowds. Just your boat, crew and the sound of the sea.

After standing cramped on the train for an hour as I left London heading South, the passengers started to thin out. I took a seat and started to breath. Arriving at the boat in the impending dark, Vince was standing in the cockpit dressed to go to sea – ‘Get your kit on, tide and wind are perfect to leave now’. My breathing sharpened.

As we trundled down the river in a flat calm, Vince ran me through safety onboard. I didn’t know a backstay from a jackstay, but Vince was calm and confident and put me at ease with his ‘need to know’ brief. The watch system meant I was due on deck at 02:00, so myself and my watch leader Mandy, headed below to get some rest. I crawled into my sleeping bag, and with the waves lapping against the hull, I fell into a deep sleep.

I awoke to the violent crash of waves against the hull. I dressed as quickly as I could with the boat lurching around and headed up on deck. As my night vision focused, I could see Vince was sitting serenely on deck sipping a cup of tea. What had sounded like impending doom below decks, was actually a ‘tidal rip’. ‘The water in the Solent ebbs through a small gap between the mainland and Isle of Wight when the tide goes out and it creates a small area of choppy water’ explained Vince. ‘Once we’ve passed Hurst Castle and the Needles lighthouse, we’ll be fine’.

He was right – as we ghosted past the circling loom of the Needles lighthouse, the sea flattened and it soon became clear why Vince does what he does. As I steered the boat under Vince’s occasional guidance, I got lost in my own thoughts. I felt in control with the boat gliding effortlessly along. 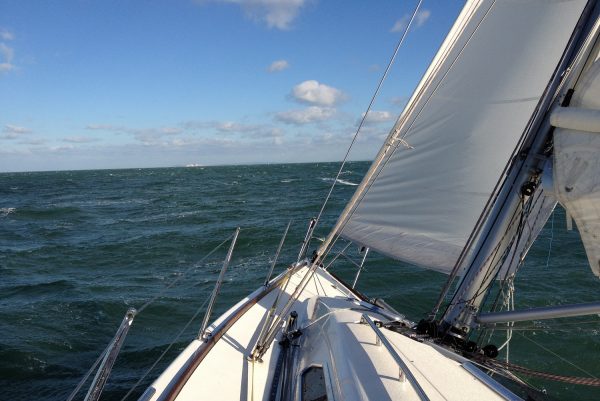 A few hours later, as dawn started to break behind us to the East, the wind rose. Several dark clouds passed over us in combination with the spray from an occasional wave. There’s nothing quite like sipping a cup of hot tea below decks after a wet watch.

With no TV to unwind with, or mobile phone signal, I was finding myself appreciating simple things more than ever before. To curl up in a warm sleeping bag and drift off to sleep at 06:00 on a Saturday morning was pure luxury.

Silence – except for the gentle clanging of rope on mast. Heading up on deck, still befuddled by sleep, it felt like we had entered another world. A paradise with blue water, rugged cliffs and not a soul in sight. Rubbing my eyes, I could make out the haunched figures of Vince, Mandy and John against the blazing sunshine – sitting together on the back of the boat – not a word emanating. Fishing rods in hand, their comfortable silence conveyed the easy tranquility of the bay. 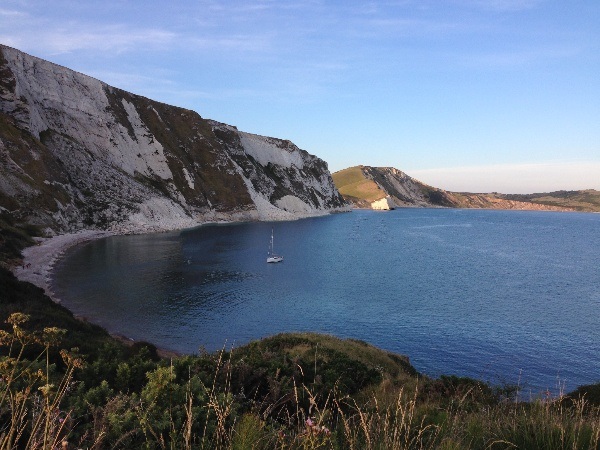 Mupe Bay on Dorset’s Jurassic coast is a pretty spot. There’s no white sand or swaying palms, but the knowledge of having earned my passage put me in high spirits. The bay and cliffs were untouched by man – exactly as they would have been a thousand years ago (bar a little coastal erosion). 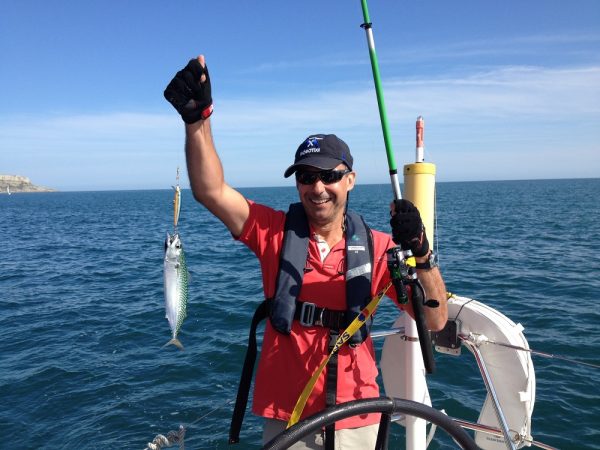 With mackerel caught, cooked and eaten we headed ashore to explore the coastline. Without a recent heart MOT I wouldn’t recommend anyone climbs the cliffs of the bay, but if you do the rewards are colossal with Portland Bill in view beyond Lulworth cove and the impossibly overhanging Gad Cliff to the East – the views are truly spectacular. 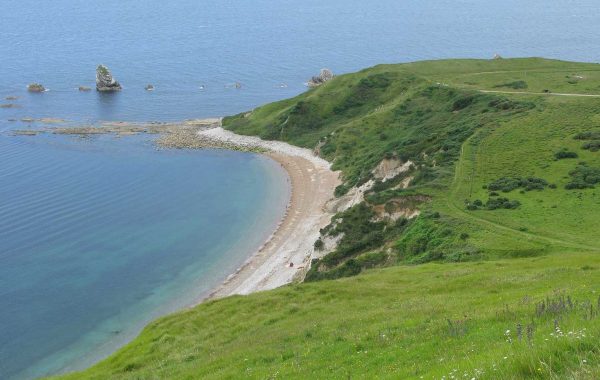 Idle chatter of a two mile hike along the cliffs to a pub in the relative metropolis of Lulworth cove soon faded. We were here to enjoy the views, nature and the simplicity of the natural surrounds. As we settled down on the beach that evening for a BBQ, I asked my ship mates what had brought them together.

Sailing of course, and a love of exploring by sea. They had met through Pure Latitude Boat Club, and had used the boats for their own trips and also joined a variety of club events – and  it was through these that they became friends and started to embark on their own adventures together.

Time and tide wait for no man Vince had told me as he outlined our 4am departure. With the breeze behind us, we upped anchor, hoisted the sails and pointed the boat East and homeward bound. This time with the wind ‘aft’ it wasn’t long before Vince called for the spinnaker and this large powerful sail had us skipping past a host of enticing bays – oh for another time.

The bacon sandwiches I enjoyed that morning are some of the best I have ever tasted. I’m not convinced it was the freshness of the bread (questionable) or the provenance of the bacon (equally doubtful) but rather the fresh sea air and the freedom of the water that made our breakfast taste so good.

After we had eaten, I asked Vince what makes him so passionate about the sea. He told me he loves his family, and the business he runs and the sociability of urban life. But heading out to sea, to harness and be part of the world’s last true wilderness is another part of his identity. When he escapes, it’s him, the boat and the elements. It’s pure and his mind is in a different place.

Adventures at sea can be as big or as small as you make them. It takes a lot of courage to step outside of the place you feel most secure. But for the benefit of our well-being, I believe it is essential. Vince agrees.